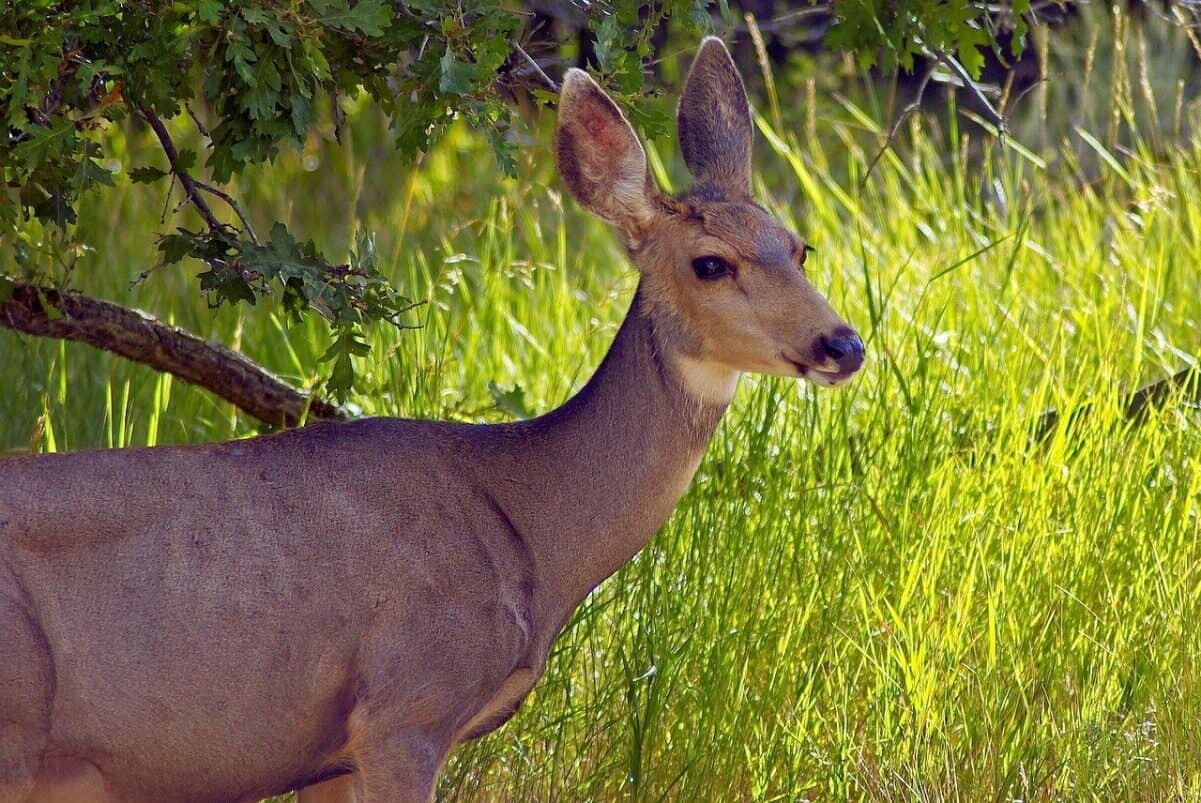 Each part of the country has its own unique wildlife, which presents different challenges and issues when living with it. For example, in Colorado Springs we are sandwiched between the Midwest plains to the east and the Rocky Mountains to the west. This means that we experience a wide range of wildlife, from wild turkeys and antelope to black bears, and mountain lions!

Living in the Pikes Peak Region and much of Colorado, we generally live with wildlife in or close to our communities. Because we are so close to the mountains and have treed communities like Black Forest, Erindale, Broadmoor, and others, we are at risk for much of the year… or the wildlife is at risk if we're not aware/cautious!

What Types of Wildlife Can You Expect to See?

Mule Deer - are a type of deer found mostly in the western US, Rocky Mountains, and the front range of Colorado, including Colorado Springs. Their defining feature is their large ears, which are about three-fourths the length of the head. They have a distinctive black forehead or mask that contrasts with a light gray face. In the summer, they're tanner brown, and in winter, they're brownish-gray in color. They have a white rump patch and a small white tail with a black tip when running.

In all areas, keep a close watch out for deer crossing the road, particularly in the late spring and early summer months when they have fawns and in the fall at dusk when they are very active. A friend once told us, that when the Air Force relocated him here, they told him during a local orientation, if you see a deer dart across the road, don't watch him trail off… watch for his buddy and buddy's buddy behind him. They normally travel together.

In most neighborhoods, they travel in small groups of 6-10; however, in the spring, they seem to be just a doe and her baby(ies) or a bunch of individuals. I recently came across seven mule deer bucks "rutting" as they establish the herd hierarchy. DO NOT approach these animals!! While they can seem harmless and will most frequently run from you, our neighbor's dog was gored by a large buck's antler when he felt threatened…. they will challenge each other.

Squirrels - We see three basic types of squirrels in Colorado the American Red Squirrel, the Fox Squirrel, and the Abert's Squirrel. The Abert is the most recognizable because of its dark black color and tufted ears.

There are a lot of squirrels in Colorado Springs, and they can be a nuisance. These animals will quickly dart into the road and often change direction at the worst possible time, so be careful when driving.

They can also be destructive if they get into your attic or home, creating problems with electrical and insulation. It's important to cover potential openings in your home, especially your attic. Otherwise, you can try using a squirrel repellent that's safe for humans and pets.

The good news is that these animals aren't aggressive and typically won't attack unless they're threatened or if they feel their territory is being invaded.

Bears - Homebuyers new to Colorado often ask about grizzly bears. There are no known grizzly bears in the entire state of Colorado.

There are an estimated 8,000 to 12,000 black bears living in Colorado today. They can be brown, honey-colored, blond, or cinnamon-colored and are the only type of bear known to live in the state.

The bears can be especially dangerous before and after hibernation when they are particularly hungry. They even make their way into dumpsters and stores (as we've seen on rare occasions on the news). The bears and mountain lions will climb trees. The only black bear I've seen in town was off W. Woodmen Rd, pretty high in a tree on a 3-acre property. He didn't want to deal with us, but if there were baby cubs involved it might have been a different story!

The chances of a fatal black bear attack are relatively slim. In fact, out of the 25 recorded cases over the last two decades, only three resulted in fatalities.

Prairie Dogs - One of the most prevalent mammals in Colorado Springs is the prairie dog. These furry animals are often seen near the entrance to parks and in areas that have been disturbed, such as construction sites.

Prairie dogs are important to the ecosystem because they eat insects, which can damage crops. However, they can also be a nuisance because of their droppings.

They often dart out into the road, surprising drivers, so it's important to be on the lookout, especially in more rural areas.

Mountain Lions - These are large, tan cats that live in the Americas. They have tawny-beige fur on their bodies with black markings around their snout and ears. Their tails are black, and they have white bellies and chests.

Mountain lions are a predator that eats mostly deer, but they are also known to attack people. They are shy creatures and usually avoid humans, but if you happen to be in the wrong place at the wrong time, you might get a surprise!

Types of Wildlife in Your Neighborhood?

Each Colorado Springs neighborhood seems to be a habitat for different kinds of wildlife. Here's a look at a couple of areas that tend to have a higher concentration of wildlife than the rest of the area.

The Ponderosa pines of Black Forest allow animals and roam freely, we have mule deer, coyote, fox, squirrels (at least two different breeds, including black "Abert" squirrels), wild turkeys, rabbits, and a couple of bears… we've even seen Moose in the Black Forest. It is VERY unusual for moose to live at this altitude, so it was strange to have one here and in the Douglas County area just north of here.

Moose are found throughout the northern regions of the United States, Canada, and Alaska. They're large animals with a lot of fur that helps keep them warm in cold climates. They live in forested areas with streams and ponds, which is why they're especially rare in the arid Black Forest area.

The West Side is the Wild Side

The west side of Colorado Springs sees even more wildlife primarily because it is up against their natural habitat, the mountains, and National Forest. I'm not sure I've ever shown houses in Peregrine, Broadmoor Bluffs, Manitou Springs, or the Skyway neighborhood without seeing deer. There are most of the animals listed above on the west side, plus more bears, and add mountain lions and big horn sheep to the mix.

Wildlife experts say mountain lions in Colorado Springs present an especially high danger to family pets. Mountain lions are apex predators, meaning they are at the top of the food chain. And because they eat smaller animals, a mountain lion encounter with your pet can be dangerous and potentially fatal. experts say to keep your pet safe during lion season, follow these tips:

Living in the heart of town doesn't mean you are immune to encounters with wildlife. In 1999 my mom's car got hit by a deer near Circle and Fountain / MLK bypass… he jumped the car next to her and hit the front left side panel of her car. There are creeks and natural habitats that course through our city, creating avenues for deer and other critters to come into the city.

It's not unusual to find mule deer in the City limits of Colorado Springs. Although raccoons, skunks, owls, and squirrels are the most common in-town wildlife. These are still wild animals, so it's a good idea to keep a safe distance from these critters even in an urban setting.

Now, out east in areas like Peyton and Calhan, you must be aware of the coyote and fox, especially if you want to protect your cats and chickens at night. Let the rabbits and ground rodents be their prey! There are also large herds of antelope that roam the prairie in eastern Colorado Springs and from here to Texas and Montana.

These are generally much more slow-moving creatures, and since they are out in the open, they are easier to spot as opposed to the deer that often dart from trees and bushes into roadways. Watch for antelope, especially in the areas along Black Forest Rd, Woodmen Rd, Marksheffel… and east to Falcon, Calhan, Ellicott, Ramah, and even south of Fountain.

There are many great places throughout the state of Colorado to observe wildlife in their natural habitat. Here are some of our favorites.

Another great place to see more exotic Rocky Mountain wildlife is Mount Evans. Mount Evans, located 90 minutes west of Denver and is a popular destination for visitors who want to enjoy views of mountain peaks, alpine lakes, and glacier valleys. The Summit Lake area is a National Natural Landmark and home to rare plants only found at Summit Lake and in the Arctic circle. With 14,130 feet being the highest paved road in North America providing access to this beautiful location, Mount Evans Recreation Area attracts 200,000 visitors each year.

Mountain goats were introduced to the Mt. Evans, Colorado area by Colorado's Parks and Wildlife (previously Colorado Division of Wildlife), and individuals occasionally make their way north to the park. Mountain goats are not native to Colorado, and they can carry diseases that can infect native bighorn sheep, which are another species we see both along the Front Range and in northern Colorado.

Cheyenne mountain state park offers 28 miles of trails for hikers, bikers, and equestrian users. All of the trails open to dogs use are Raccoon Ridge, Acorn Alley, Bobcat Way, and the designated portion of Soaring Kestrel.

The park is home to plenty of mule deer, elk, and wild turkeys. It is not uncommon to see these species roaming the park, feeding or resting among the scrub oaks, ponderosa pines or the abundant prairie grasses. Along the trails on the eastern edge of the park listen for black-tailed prairie dogs as they warn other colony members of a stranger presence.

Other predators like the black bear, bobcat, and mountain lion inhabit the park. Their presence can be detected by examining the tracks, scat, and other clues left along the trails.

Of course, the safest place to see wildlife in Colorado Springs is the Cheyenne Mountain Zoo is a world-renowned zoo located in Colorado Springs, Colorado. The zoo is home to over 1,000 animals representing more than 120 species. The zoo has been accredited by the Association of Zoos and Aquariums (AZA) since 1966 and was designated a World Heritage Site by UNESCO in 1985.

As a friend used to tell us… Stay Alert, Stay Alive… important advice for you and the wildlife at risk (however, I don't think they're reading this blog).

Cost of Living in Colorado Springs - 2021

Showing Homes Up the Pass

How did the Town of Monument get its name?

What to do About Household Hazardous Waste

What's My House Worth? Try Our Home Value Estimator