Don't Forget The Septic Inspection When Buying a House 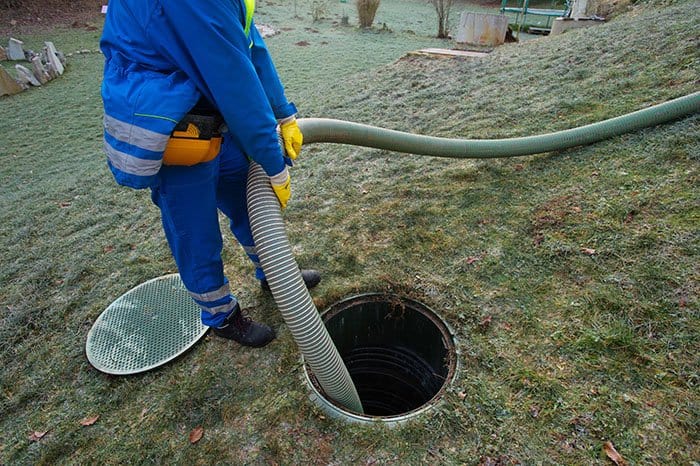 If you are buying a house that has a septic system it is essential that you get that system inspected. Septic systems are just that “systems” and with any type of system, there are multiple things that can potentially go wrong. Is it essential to get a septic inspection when buying a house?

The time to find out there is a problem with your septic system is before you close on the property. Problems with a septic system can range from simple repairs two very complex replacement which can cost tens of thousands of dollars.

How The Septic System Works

A septic system at a residential property takes the place of a municipal sewer system. According to the EPA, Decentralized systems or Septic Systems are used in 25% of U.S. homes and are permanent components of our nation’s wastewater infrastructure.

The septic system begins at the sanitary pipe from the house that transports wastewater to the septic tank. The septic tank is a large container usually made of concrete, fiberglass or steel. The tank is buried and is watertight allowing the liquid in the tank to slowly break down solids and safely dispose of liquids.

This tank holds wastewater from the house allowing solids to settle to the bottom of the tank where it creates a “sludge” layer. Conversely, grease and oils float to the top of the tank creating a surface layer called “scum”. This scum layer creates a seal which helps keeps air out, allowing bacteria in the tank to flourish. This bacteria subsequently breaks down the solid waste in the tank.

The area in between the sludge and the scum is called effluent. This layer should consist of a mostly clear layer of liquid. There T-shaped outlets inside the tank which allow the effluent to flow via gravity into the leach field while Baffles keep the scum and solids from moving past the tank and into the leach field.

Once in the leach field, the effluent passes into long cylindrical leaching chambers. There are a number of different options as far as the types of chambers used. The choice of appropriate chamber type depends on the percolation test results and how well the soil absorbs water.

The ultimate job of the leaching component is to allow the effluent to percolate down into the subsoils where bacteria in the upper layers of soil continue to break down materials from the tank. Further down into the ground soil, sand and rock act as a filtering system for the liquid until it eventually ends up back in the groundwater.

As you can see, there is a lot happening with a septic system. If the system is well designed, correctly installed and maintained, it should last for a long time but this isn’t always the case.

A lot of homeowners don’t even realize they need to provide ongoing maintenance, care, and cleaning of their septic systems. A septic system should be inspected every three to five years. The results of the inspection will determine if the tank needs to be “pumped”.

Depending on location and size the cost of inspection and pumping can run between $300 and $500. The cost of maintenance is significantly less than the cost of repair or worse replacement.

If you are doing the inspection as part of a home purchase, you’ll want to coordinate the timing of this test to coincide with your general property inspection. This way if there are any problems with the home’s plumbing systems, they can be brought to the home inspectors attention and noted in the inspection report. Additionally, batching these inspections together helps with the timing on any inspection contingency related deadlines you are up against.

The actual inspection of the septic system starts with gathering information, this is actually more of a pre-inspection. At this stage, you’ll be rounding up documents and getting questions answered prior to the actual inspection. This process will help the inspector understand what they need to look for.

Since the system is underground no inspection can find everything without excavating and this is impractical. So, at this stage the process you will be trying to find clues as to where potential problems might be based on installation and maintenance.

Here is a list of  questions you will want to answer before the inspection:

Assembling this information will do two things, first it's going to help the technician that inspects the system to know what to look for secondly it's going to give you a sense of how the home seller maintained the system.

The On Site Inspection

Starting at the house the technician well first try to establish that the sanitary pipe used to deliver liquid to the system is functional an intact, this is done by performing a flow test.

This test involves turning on all the water in the house to add or charge the system with enough water to support the number of people the system was designed to support for 24 hours, this is generally a couple of hundred gallons.

If little or no water flows into the tank there is a problem with the plumbing in the home or with the sanitary line. Much like the sanitary line on a traditional municipal sewer system, this pipe can become displaced or cracked creating an opportunity tree roots or other debris the clog the pipe and create flooding inside the house. If this is the case the line may require a sewer line inspection.

If this type of problem exists at the inlet pipe to the tank, the technician will most backtrack through the homes plumbing system testing each individual water source until the problem is found.

On the other hand, if the water in the tank rises quickly, there's most likely a problem downstream. What should happen during this test is the water entering the system should force the effluent out through the baffles and on into the leach field.

The flow test is the most substantial part of the septic test because it touches so many aspects of the system and verifies that the liquids are moving through the system in the correct manner.

The next test should be on the tank itself and the levels of accumulated scum, effluent, and sludge and solids. While the solids are intended to remain in the tank until they are pumped out a good amount of those solids will turn into sludge and move to the bottom of the tank.

The technician will start by measuring the depth of the top scum layer. Once this is done they begin to pump the tank until they reach the underlying sludge layer at which point they measure that as well. These two layers should be similar in depth each accounting for about 30% of the total tank volume, the rest of the space should be dedicated to effluent. If this is not the case the technician will be looking for bigger problems later on in the leach field.

The effluent area needs to account for a larger percentage of the system because the solids in the tank need time to settle. It is important to keep the solids and the scum out of the distribution area or leach field. These can cause the field to clog and fail, resulting in a very expensive repair.

The final area the technician will examine is the leach field. This is first done by performing a visual inspection. Looking for any wet areas where water might be resting, they will also be smelling for foul orders created by problems as well.

Finally, the technician will use a probe to test the leach field for hydraulic stress, this simply means is the leach field flooded. If the probe holes rapidly fill up with water there is most likely a problem with the system.

As you can now see, there is a wide range of potential problems that can occur with a private residential septic system. While most systems continue to work just fine for years, inspection at the time of sale is a wise choice.

1995 U.S. Census data report that over 10 percent of all systems back up into homes or have wastewater emerging on the ground surface, and that more than half the systems in the United States were installed more than 30 years ago when onsite rules were nonexistent or poorly enforced.

You want to find out about any potential problems before you close on the property. By making the septic testing a part of the inspection process, you have the ability to get the home seller involved in any subsequent repairs through the inspection objection contingency.

Title vs Deed - Is There a Difference?

The Importance of a Buyer's Walk Through!