The Promenade Shops at Briargate 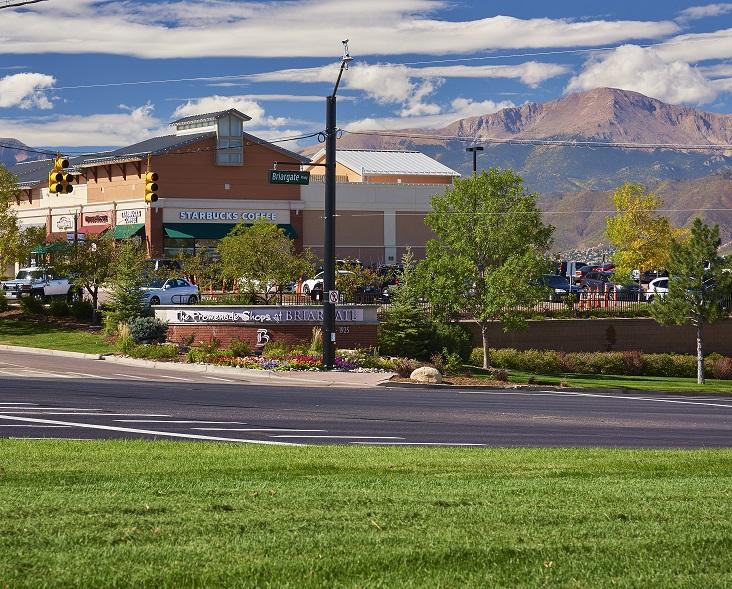 One of the newer shopping mall developments in Colorado Springs is The Promenade Shops at Briargate, an open air, pet-friendly, outdoor shopping center, located east of I-25 at Briargate & Voyager Parkways.

Since their opening, The Promenade Shops at Briargate has seen significant changes. The 2008 economic crisis resulted in some retail closure, but the center retained a vibrant tenant mix to attract shoppers. In 2013, an ownership change brought more exciting changes. Two new retail and restaurant building were constructed. They were completed and fully leased by mid-2016.

Some of the original tenants of The Promenade Shops at Briargate currently occupy the center including Pottery Barn, Williams- Sonoma, Talbots and J. Jill. Recent additions include Modern Market, Charming Charlie, and Soft Surroundings,

There are 55 total businesses in the shopping center, including 10 restaurants. The shopper target demographic age group ranges from 20-60 with the varied tenant mix including Anthropologie, Apple, and Sephora.

Some of the businesses are locally run as franchises, including Rocky Mountain Chocolate Factory, Complete Nutrition, and Bird Dog BBQ.

Before the development of the Promenade Shops at Briargate, Colorado Springs didn’t have many restaurants like Teds’ Montana Grill or P.F. Chang’s. The location of the center is intended to intercept drivers on their commute on I25 and offer a new mix of retail and food from a variety of sources that are for the most part unavailable elsewhere in Colorado Springs.

A variety of events are held for residents of Briargate as well as Colorado Springs, including the summer Farmers Market on the Promenade. The weekly event starts on Father’s Day. The Farmers Market will run every Sunday until the end of September, as the last day. The market is open from 9am to 1pm, which allows two hours for farmer’s market shoppers to peruse the vendors before the shops open, and lasts for another two hours after the retail shops and restaurants open.

The farmers market is filled with local farmers, thanks to the farmer coordinator, Chris Sniffen, a local egg farmer who owns a chicken ranch in Calhan. As a local farmer himself, he has enough connections to populate the farmers market and has been able to connect with local honey producers, herb and tea blend growers, grass fed meat producers, and an organic vegetable farm in Larkspur. The goal of the market is to offer the shoppers at the center an attractive array of locally sourced and organic food. Look for this event on the road between Biaggi’s and P.F. Chang’s.

Parking is conveniently located close to shops & restaurants. Exciting changes are planned for late summer 2017 to enhance the shopper experience.