Colorado Springs Street Names, What do they mean? 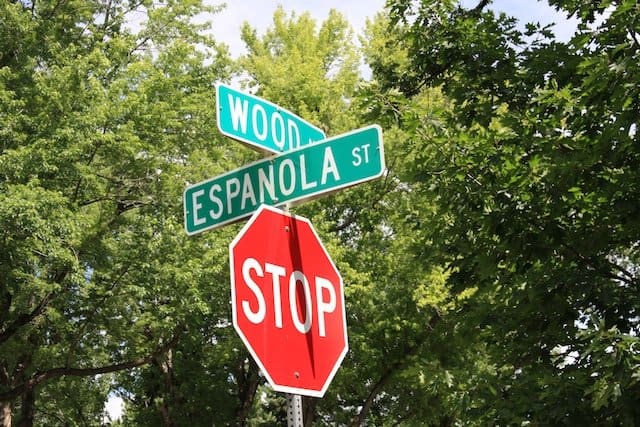 We work with a lot of home buyers, and many are new to the Pikes Peak Region. One of the most common questions we get from them is, “How do you pronounce that street name”?

How someone pronounces names like Cache La Poudre, Tejon or Uintah are good indicators of how long they have lived here.

Street names in the Pikes Peak region run the gamut from historically significant to merely descriptive like Roller Coaster Rd. or Lake Ave.

The best place to start is right in the heart of Downtown Colorado Springs with Pikes Peak Ave. This street was one of the only roads named by the city's founder General William Jackson Palmer himself. He chose the name for the street’s orientation to Pikes Peak.

Queen Palmer, General Palmer’s wife, came up with many of the original Colorado Springs street names. Queen suggested naming Colorado Springs streets after iconic elements of Western geography. The intention was to honor her husband's railroad career. So, Queen drew these names from the areas he had explored while establishing train routes.

As the city grew away from the downtown area, the streets’ names became more generic. We saw presidential titles like Fillmore, Van Buren, Madison, Washington. Numbered streets as well as bird names and trees. Not nearly as interesting as the original street names.

As the city grew and developed its history, street names began to reflect a more local feel.

One good example is Kelly Johnson Blvd., located just off the south gate of the Air Force Academy. Kelly Johnson was an aeronautical engineer and crucial in developing many modern aircraft. As a member and founder of the Lockheed Skunk Works, Johnson is credited with the KISS principle.

Mark Dabling Boulevard honors a Colorado Springs police officer killed in the line of duty. Officer Dabling was killed in 1982 during a routine traffic stop. The driver emerged from his car with a sawed-off .44 Magnum rifle and shot Patrolman Dabling in the back. Dabling died later in surgery. The shooter was apprehended and sentenced to life imprisonment plus 16 years for robbery and burglary.

Powers Blvd. is a major thoroughfare on the east side of Colorado Springs. This street is named for former Colorado State Senator Ray Powers.

Many of the street names here in the Pikes Peak region are descriptive; some describe the final destination. Academy Blvd, for example, leads to the south gate of the United States Air Force Academy. Others describe characteristics of a particular street like Roller Coaster Rd. which has the profile of a roller coaster ride, and Mesa Rd runs along the spine of a large mesa on the west side of Colorado Springs.

Many Colorado Springs streets appear to be named for their destination or characteristics but don’t fulfill the promise, for example:

Once you sort through the confusion and develop an understanding of what the street names mean and where they go, getting around Colorado Springs gets pretty easy.

If you'd like to learn more about the Pikes Peak region’s history, Newport in the Rockies is a fantastic resource.

Christmas/Holiday Lights in Colorado Springs for 2022

Searching for the Right Schools!